Dredging of the White River to start in 2016 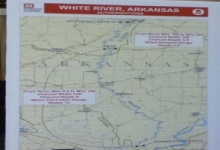 The U-S Army Corps of Engineers is about to start a major dredging project involving the White River. The three-year project would take place from Newport down to Clarendon. Vickie Wilson is with the Army Corps of Engineers in Memphis. She told the Arkansas Waterways Commission the first year would be gathering permits and conducting environmental studies. She tells what else is involved.

“Year one is permits, which include environmental studies to make sure the dredging would not affect any protected species of wildlife,” said Wilson. “The second year would involve trying to clear out all of the debris out of the river. There are a lot of trees and other debris that has to be taken out of the river before the actual dredging would take place in the third year. The total work is expected to be about $10 million.”