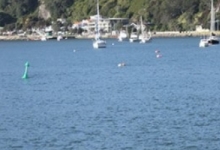 An ongoing maintenance programme consisting of both land-based and sea-based dredging methods is set to proceed for the Whakatane Harbour entrance.

The Whakatane District Council’s projects and services committee approved the methods after discussing maintenance options investigated by Opus International Consultants, which assessed the feasibility of the available dredging methods.

The TSHD option would require a significant financial investment. Six land-based methods were reviewed, with a long reach excavator and a sand rake extension arm (which has already been used to good effect) being the favoured option.

The council drew more than 40 written submissions and 185 survey responses on harbour improvements through its recent Long Term Plan consultation process, with 73 per cent of respondents supporting an improvement programme.

Whakatane District Council projects and services committee chair, councillor Andrew Iles, says despite investigations since at least the 1970s, no structural solution has been identified which can provide a failsafe solution to harbour entrance accessibility and address cultural concerns, without increasing the potential risk of flooding for the Whakatane township.

“That’s why council’s focus is now on maintenance solutions and widening the eastern wall to allow easier access for land-based dredging, similar to that carried out over the past two summers,” he says.

“We’ll continue to refine our maintenance programme and consider the dredging options identified in the Opus report.”

While a purpose-built suction dredge has been identified as an option to improve the situation on the outer bar, the likely cost of $500,000 means further investigations are necessary before any decision is made.

This would include discussions with other potential users who could share the capital and operating costs.