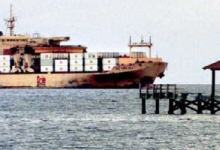 A deeper ship channel has been scrapped as part of a study on future expansion at the state port, the has confirmed.

The Corps undertook an expansion study in 2011 that was modified in 2013 to include deepening the ship channel from 36 feet to 42-47 feet. Channel deepening is seen as a key to port growth. Without a deeper channel, the port will be unable to compete for cargo being hauled on larger ships that require drafts deeper than Gulfport can offer. What’s more, the port is spending about $30 million on three, rail-mounted gantry cranes designed for bigger vessels.

SANTA BARBARA, Calif. – The Santa Barbara harbor has closed to allow the just-arrived dredge to dig in on a project where sand has blocked most boats from going in and out. The sand bar developed in the recent series of storms. Harbor Patrol Lt. Nathan Alldredge was at the controls of a patrol boat… Read More