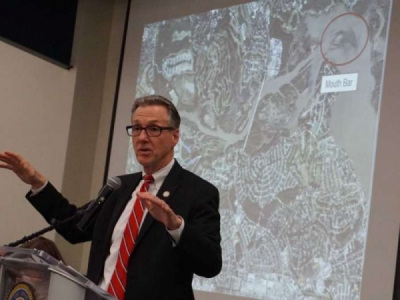 U.S. Congressman Dan Crenshaw shocked many residents when he said the City of Houston has not yet submitted a permit application to the U.S Army Corps of Engineers for the dredging of the notorious Kingwood mouth bar near the San Jacinto River.

If approved, the application would allow the city to receive federal funding to use toward the $40 million dredging project.

Houston officials said they still must prove the mouth bar — a buildup of 500,000 cubic yards of sediment in Kingwood that could exacerbate flooding — was the result of Harvey before submitting.

The mouth bar dredging is in addition to a $70 million dredging project currently underway in the San Jacinto River.

“We talked quite a bit about the data that we had because what you have to do is show that it’s actually Harvey related,” Houston Chief Resilience Officer Steve Costello said during Houston’s Capital Improvement Projects Community Meeting at the Kingwood Community Center on Thursday.

Costello said the City of Houston is taking core samples and basing it on the color of the material to determine what came from Harvey.

However, Crenshaw said the Houston officials need to submit the application as soon as possible so the project could be completed while the dredging equipment is already in the area.

It would save money and expedite the project, he said.

“We’re working closely with the City of Houston on this, and Costello in particular, and they assured us that they will have that application in hopefully this week, but we’ve heard that last week and the week before that,” Crenshaw said.

Houston City Councilman Dave Martin said he has been meeting with Governor Greg Abbott along with the Army Corps of Engineers and FEMA since October 2018 about the removal of the mouth bars.

“Our point in going back to the governor on Oct. 11 with a team of folks was to plead to the governor and the Texas Department of Emergency Management that while we have the equipment in the water why can’t we use some additional dollars that (Houston) Mayor (Sylvester) Turner helped us with along with the resources that the State of Texas and Governor Abbott and continue this dredging project and take it from the West Lake Houston Bridge into the lake where the mouth bars are,” Martin said in a statement in November.

Kaaren Cambio, field representative with Crenshaw’s office and San Jacinto River Authority board member, said they invited the corps of engineers to their office in January because they were working with the City of Houston to help expedite the permit application process.

Cambio said the cost rises approximately $17 million to nearly $60 million if the equipment that’s already in the San Jacinto River has to demobilize and re-mobilize. Cambio said the City of Houston needs to turn in their permit application before April because it will take four months to get the permit.

“The permit process from the corps of engineers has two hard-stop 30-day wait periods in that process. So a permit can’t be done unless in four months because it has to go out for public comment,” Cambio said.

Cambio said the City of Houston also has to file for a request for disposal permit application with the Army Corps of Engineers to dispose the sediment from the mouth bar on a private property on the other side of the San Jacinto River.

Houston has made an agreement with area resident Berry Madden for the sediment to be disposed on one of his properties that is near the river.

“Under the Stafford Act, you can only remove the amount of material that came from that specific disaster,” Cambio said. “So (Houston) had to do core drillings, they’re still doing that, they’re almost done, but they didn’t have to wait until those core drillings were done to file for this permit.”

Cambio said Crenshaw’s office and the Army Corps of Engineers has been trying to get the City of Houston to expedite their permit application since April 2018.

“We met with governor about two Mondays ago. We went to Austin and the first thing he said is ‘Kaaren, how can you not get them to file their permit’ and that’s what’s really frustrating because literally they can file a permit before their permit based upon a broad set of terms. The (City of Houston) chose to do it their way and they keep saying ‘two weeks, two weeks, two weeks.'”