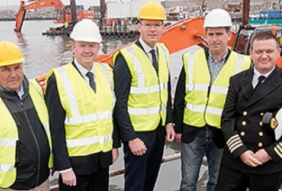 During his visit to the South East, The Minister for Agriculture, Food and the Marine, Simon Coveney TD, took the opportunity to inspect progress on the €6m dredging works at Dunmore East Fishery Harbour Centre. The works which involve removing approx 27,000 metres cubed of material located in the harbour basin and in the approach channel to the port, commenced in June and are substantially completed.

The Minister said “I am delighted to hear that the dredging project in Dunmore East is progressing according to plan and within budget. When completed it will transform the harbour for all our users and play an important part in increasing economic activity and creating much needed jobs here in the South East.”

The material in the harbour basin which was heavily contaminated has now been successfully dredged, treated and removed from the harbour, work is set to commence on removing approximately 6000 metres cubed of material from the entrance channel which is not contaminated. It is expected that the works will be fully completed by the end of November.

The Minister went on to say “These works will remove the operational difficulties experienced by fishermen, landing times and vessel management will be much improved as will the availability of the syncrolift, which is required to raise vessels to facilitate their repair and maintenance. Marine leisure users will also see benefits and overall the harbour will be more attractive operationally for the increasing cruise liner traffic.”

The Minister concluded saying “These much needed works are a sign of my Governments commitment to the South East and complement other recent investments in Dunmore East on the new and enlarged slipway for marine leisure and fisheries users and also the newly opened harbour user’s facilities in the ground floor of the Harbour Management Building.”

As part of his visit to the South East today, Minister Coveney met with local fishing industry in Kilmore Quay to discuss the introduction of the first phase of the new landing obligation or ‘discards ban’ for the whitefish fleet.

Minister Coveney said “Today was an opportunity for me to outline what has been agreed in terms of the phasing in of the landing obligation under the new Common Fisheries Policy for our whitefish fleets. Just as importantly, it was an opportunity for me to listen to the concerns of our fishing industry with regard to this major change in the way our fleets will operate in the future.”