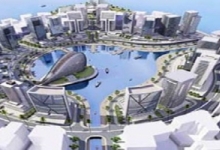 The Federal High Court Lagos has been asked to stop the ongoing dredging of the and building construction on the by the and private investors.

The Legal Defence and Assistance Project (LEDAP) is alleging that the defendants did not undertake any approved as required by law.

Besides, it said there was no plan to ensure that the dredging of the ocean will not overflow the coastal environment and the rural communities along the banks of the ocean.

LEDAP said the Federal , joined as a defendant in the case, did not authorise the project because it has not issued the statutory approving the dredging and building construction as required by the Environmental Impact Assessment Act 1992.

The plaintiff is praying the court to declare that it is unlawful for the Atlantic City Project to be undertaken without an approved environmental impact assessment as required by the Environmental Impact Assessment Act 1992.

It said to continue with the project would be detrimental to the environmental safety of communities along the coastal banks of the Atlantic Ocean.

The plaintiff is asking the court to issue an injunction restraining the defendants from continuing with the project until properly approved environmental impact assessment is conducted, through consultation with the coastal communities as required by law.

LEDAP wants the court to order Lagos State government and the South Energy Limited to adequately resettle all the communities on the coastal banks that are already affected or likely to be affected by the dredging.
According to the plaintiff, the court should stop the project because of its destructive impact on the aquatic life in the entire Nigerian territorial waters and the environment of the coastal communities including Victoria Island, and several fishing settlements on the west coast of the ocean.

The Eko Atlantic City, largely owned by a consortium of foreign companies, involves deep dredging of the Atlantic Ocean and construction of high-rise commercial and residential buildings on the recovered shores of Bar Beach, Kuramo beach and Victoria Island Lagos.
LEDAP said under the Act, any person undertaking such a project is required to undertake detailed field assessment of its negative impact of on the environment, and in consultation with the affected communities, develop plans on how to ameliorate and solve the environmental problems.

“The dredging of the ocean and construction of buildings on the reclaimed land under the Eko Atlantic City will not only flood the coastal areas in coming years, but will destroy aquatic life in the entire Nigerian territorial waters of the ocean including fishes and animals, thereby negatively affecting the rich ecosystem of the ocean, the and adjourning rivers, swamps and wetland of the country.

“Most of the rural fishing communities who depend on the ocean and surrounding waters for livelihood will be utterly displaced and impoverished,” LEDAP said.

The suit was filed following series of unsuccessful requests under the 2011 by LEDAP on Lagos State Government and South Energy Limited, the lead owner of the Eko Atlantic City, for details of environmental impact assessment conducted before embarking on the project.

Lagos State government and South Energy Limited have already sold the future apartments and buildings in the new city, which runs into billions of .

LEDAP said they allegedly have not made any plan to take care of the environment of the coastal communities against the obvious consequences of displacing and dredging the ocean.

“Already, many of the areas are over flooded from the dredging and construction works,” it said.

No date has been fixed for the hearing of the suit.