Council’s 17-year, £43m Plan to Replace Every Groyne on the Beach 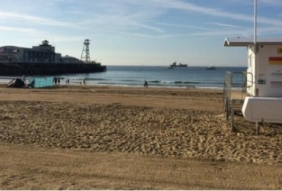 DETAILS of a £43.7 million programme of works to protect Bournemouth’s coastline for the next 100 years will go on display this week.

The work will see the replacement of all 53 groynes along the beach with three more to be installed and three beach replenishments.

Works will span 17 years and will be delivered in a phased approach.

The first phase could begin within weeks and will run until 2020. It will involve the replacement of 25 groynes spanning the seafront from Southbourne to Hengistbury Head and a beach replenishment between Bournemouth and Boscombe Piers and to the east of Boscombe Pier during autumn/winter 2015/16.

Phases two and three will replace the remaining groynes along the seafront from Southbourne to Alum Chine and a further two beach replenishments.

Councillor David Smith, cabinet member for Planning and Environment, said: “These vital works are taking place not only to protect the coastline from future coastal erosion but also to maintain the award winning beaches which attracts millions of visitors and residents to the coast each year.

Bournemouth is built on a coastline which is currently eroding at around one metre per year. Seawalls and groynes have been built for more than 100 years to protect the cliff and cliff-top properties and beach replenishment has been used as a form of coast protection for 45 years.

Staff from the project team will be on hand at the event to answer any questions and following the event the information will go on display in Bournemouth Library from September 21-28.

For more information go to bournemouth.gov.uk/beachmanagement