Could dredging the Cree save millions? 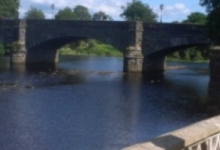 A Newton Stewart resident who has monitored the River Cree almost every day for 18 years says Dumfries and Galloway Council could save millions in flood defences by simply dredging the river.

Jim McDonald, who lives in Arthur Street, believes the big flood of November 2012 was linked to work done on weirs further up the river in 2011, which, he claims, resulted in tons of gravel rushing downstream before settling on the north side of the bridge.

Jim, who has engineering knowledge, explained his theory: “I didn’t discover this work had been dome until 2013. Two weirs were reduced and one as taken away. This was done, I believe, to improve the habitat for fish and spawning beds. But a report from Dr Hamish Moir, of the eco-engineering company involved in the work, stated this should be carried out in stages, over time. My theory is this was done too quickly and the gravel rushed down.

“I have asked for a meeting with council engineers because I feel the bridge is being compromised. The gravel is causing the river to surcharge, or back up. The river banks form a cul-de-sac now. There is no flood plain anymore.

“The simple solution is to dredge the river, rather than spend millions on flood defence walls But the council are taking advice from SEPA, and my theory is inconvenient.

“They don’t seem to have considered it but they haven’t explained why.”

Mr McDonald put his home, which backs onto the River Cree, up for sale before the November 2012 flood, but he now fears that the publicity surrounding the flooding problems will make riverside properties difficult to sell, even though his home has never flooded and a new brick wall protects his garden.

A spokesperson from Dumfries and Galloway Council said: “Officers from the Council have listened to the suggestion from Mr McDonald with respect to the removal of gravel upstream of the Cree Bridge. In February officers and the hydraulic modelling consultant, Kaya Consulting met with Mr McDonald in Newton Stewart to discuss the suggested action. Following this meeting, additional work was undertaken to consider the benefits of removal of gravel.

“The results of this work have been published in the updated Newton Stewart Flood Study, available on the Council’s website (http://www.dumgal.gov.uk/index.aspx?articleid=13165). The results of the modelling work indicated that there would be no demonstrable benefit in removing gravel from the bed of the river upstream of the Cree Bridge.

“At the Economy, Environment and Infrastructure Committee on Tuesday members agreed on a programme of flood risk management works, subject to funding, which included the delivery of a flood protection scheme for Newton Stewart in the next six years. In the short-term, SEPA will be providing a flood warning system for the Cree and this is due to be in place by 2016. A 3-hour flood warning will allow those with properties at risk to install property level protection measures, which are still available with a 50% subsidy from our Council.”

Elected members also agreed the completion of flood protection works at Stranraer, including the collection of excess run-off from the Gallowhill above Ochtrelure Way developments and the formalisation of floodwater storage on fields to the south of the railway line at Blackparks through the installation of a flow control structure on the Town Burn at the point where the watercourse passes under Edinburgh Road.

A flood study will be carried out in Creetown and the Council’s Shoreline Management Plan, last published in 2005, will be updated. Flood studies for the Isle of Whithorn, Garlieston, Kirkcudbright and Kippford will be deferred until 2022-2027.