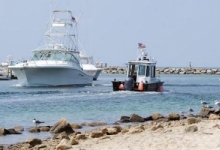 While the town dredges sediment from the mouth of Sesuit Harbor every year to ensure safe passage for boats, the interior of the harbor has not been dredged since the 1950s, according to Dennis Harbormaster Dawson Farber.

While the town dredges sediment from the mouth of Sesuit Harbor every year to ensure safe passage for boats, the interior of the harbor has not been dredged since the 1950s, according to Dennis Harbormaster Dawson Farber.

“As the harbor continues to fill with sediment from the banks, it’s making it shallower, and more difficult for boats to pass through,” Farber said. “We have some boats that are actually aground at low tide.”

The plan also tackles other bodies of water in the Bass River Watershed in Dennis, spreading the dredging projects out over a 10-year period to minimize the annual costs to the town.

“We want to identify and earmark projects for each fiscal year,” Farber said.

Dennis will ask Town Meeting voters to approve an approximately $7.7 million dredging plan that will clear out the harbor, and other navigable channels in town. The price tag could change, depending on whether the sediment is taken away by truck, or used for the nourishment of local beaches.

Depositing the sand on Dennis’ beaches is the less expensive option, and would be helpful to local beaches badly in need of replenishment.

Beach and Recreation Director Dustin Pineau says that Dennis beaches are badly in need of renourishment.

“The only beaches we’ve shown accretion of sand on are Cold Storage and West Dennis,” he said. “All our beaches are losing sand, those are the only ones we’ve put dredge spoils on in the last few years,” Pineau said.

He noted that the entire resident portion of West Dennis Beach was washed away by a storm a few years back, and sand from dredging was used to rebuild the beach, and to add dunes to protect the parking lot. Pineau added that all of Cape Cod faces the challenge of protecting eroding beaches.

Voters will be asked to approve the 10-year dredging plan at fall town meeting, but even if it passes it’s unclear how long it will take to be approved by a number of state and federal bodies including the state Department of Environmental Protection, and the Army Corps. Of Engineers.

“It’s actually going to depend more on the timeline for review by the permitting agencies…we just don’t have an exact timeline,” Farber said.