Corps Takes a Look at Lagoon 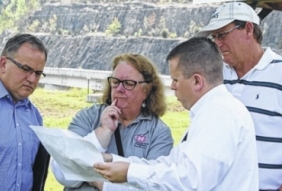 Harlan County Judge-Executive Dan Mosley along with the , a representative from Congressman Hal Rogers’ office and county employees examined the problems with the lagoon that stretches around the city of Loyall to pave the way for future solutions.

“The lagoon is supposed to have a constant flow of water,” explained Mosley. He said there was supposed to be a stream coming in about 20-feet wide which kept water flowing in the lagoon, but there isn’t. He pointed out various drainage problems with the lagoon saying, “during the flooding in 2002, water from the lagoon got up so high it nearly made it to some of the homes on Chad Street.”