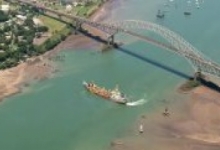 Conflict and opposition – an inevitable response to any major dredging project? A new concept says it doesn’t have to be that way. Felicity Landon reports.

There can’t be many major maritime dredging projects that have moved swiftly from conception to conclusion without a battle. It’s an accepted and expected part of life for all of those involved in such undertakings. However, a project initiated by the International Association of Dredging Companies (IADC) might just change a few attitudes.

Based on the Ecosystem Services (ES) concept, as defined in the United Nations’ 2005 Millennium Ecosystem Assessment (MA), the IADC has asked the University of Antwerp to do some unusual research. The task: to take five already completed projects and assess and review them again using the ES method, to see whether this approach would have delivered different results.

There tends to be a biased attitude against maritime dredging projects, says IADC secretary general René Kolman. “Dredging is always seen as conflicting with and against nature – but it can be so much more. Going along ES concept lines, you have a much more independent, broader assessment of the project and an unbiased discussion, instead of always pointing the finger at the dredging industry. At the end of the day, we are the ones being asked to do the job – and we think the ES concept could bring us a lot.”

ES is, he says, still a very theoretical concept, but the university’s work will, in effect, translate it into real practice. Among the case studies being analysed are the Botany Bay dredging, a North Sea wind farm project and the Scheldt flood protection. The ‘completed’ projects also include the Western Scheldt container terminal – a maritime infrastructure project that did not go ahead because there was too much opposition. “Now, when we do the ES assessment, would it deliver another result?” says Mr Kolman.

Ecosystem Services are defined by the MA in four basic categories: provisioning (products supplied from ecosystems, such as food, fresh air, water, fuel); regulatory (the benefits that ecosystems provide because they help regulate water, erosion, flooding, climate and air quality); life-supporting (the long-term significance of nutrient cycles, photosynthesis and crop pollination); and cultural (such as educational, spiritual and recreational benefits).

In applying this concept to dredging, the idea is to consider the impact of every scenario in a project, rather than simply focusing on the negatives of the actual dredge. In a flood protection project, this might include de-nitrification of surrounding land, wood protection and increased food production, for example.

“By taking this approach, you will hopefully meet less opposition because you are very transparent and inform all the stakeholders in the project,” says Mr Kolman. “This should mean you have less delay in moving a project forward; the time from preparation of the initial idea through promoting and consultation should decrease due to a better way of informing the ‘audience’.”

IADC, which is celebrating its 50th anniversary this year, wants to inform the public of what dredging is all about, he says. The findings of the study will be presented next year; the plan is to promote this approach for future projects.

The dredging industry has recognised, says Mr Kolman, that involving all of the stakeholders at the very early stages of a proposal is beneficial for everybody – and so is early contract involvement for the dredging contractor. However, there’s a sticking point here in that often the client doesn’t involve the contractor until much further down the line.

“It’s not unusual that the client’s environmental impact assessment (EIA) has been based on a certain execution method and in the end the winning contractor has selected a completely different method. So a large amount of the EIA can be a useless waste of money.”

He would urge project developers to approach dredging specialists much earlier in the process but that in itself requires a change in attitude. “They might have to select a contractor based on quality criteria and not only on price. Naturally the dredging company would want to know it has the contract before sharing information and expertise – so a lot of trust would be involved in this.”

As part of its anniversary celebrations, the IADC is producing a book covering 50 dredging projects in 50 years. It is the competition between the major contractors in Western Europe that has driven remarkable levels of innovation over the years, says Mr Kolman.

The scenario is very different in the US, where the Jones Act requires US-built and owned vessels with US crew, or in China, which currently accounts for 40% of the world’s dredging activities but is closed to non-Chinese dredging companies.

“There is no incentive to innovate in a closed market,” says Mr Kolman. “In the US they pay much more for a dredging project than in the Netherlands, for the same result and in the same conditions. Productivity isn’t pushed and there is no competition as we have in Europe.”

Among the latest innovations from IADC members is Van Oord’s Deep Excavation System (DES). With offshore gas and oil drilling set to take place at ever greater water depths, there is a lot of potential in deepsea dredging, says the Rotterdam-based contractor. The system has been developed on the back of the firm’s experience in subsea rock installation (SRI), a technique which involves installing scour protection on the seabed for pipelines and other structures. Van Oord claims the world record in SRI, at 1,277 metres, and so far it has worked with its DES at ocean depths of up to 657 metres.

With their limited flexibility, the pipelines can be damaged if they bend under too much pressure. Van Oord used the DES technique in Australia’s Gorgon Project, where three pipelines originating in the gas field had to pass over a steep subsea slope. From -600 metres, the seabed suddenly plummeted to -1 km. The solution was to dig an 8 metre deep trench in a ‘very troublesome, hard material, so hard that it was almost impossible to press a fingernail into it’, says Jan Vlak, operations manager offshore.

Van Oord used a 9 tonne heavy-duty grab suspended from an ROV to excavate the material. In such a process, the ROV is itself suspended from the fallpipe of a fall pipe vessel and determines, with a margin of just a few centimetres, where dredging should be carried out. The ROV assisted in moving the dredging spoil 20 to 30 metres to one side.

“The result was a much smoother seabed where the three 20-inch pipelines were able to bridge the steep underwater gradient thanks to the 8 m deep trench. The alternative would have been installing enough rock to create a long, broad stretch of subsea bedding. Because the gradient was so steep, a huge amount of rock would have been required. This shows that in certain situations the DES can be an additional service to SRI, depending on the circumstances of the seabed.”

A similar process was carried out to remove peaks and level out the seabed for Norway’s 486 km long Polarled Pipeline, running from the land to the Asta Hansteen oilfield, where the seabed is at -1277 metres. This removed the need to use hundreds of thousands of tonnes to create the bedding for the pipeline.

Another solution would have been to blast away the irregularities in the seabed. “But the floating debris would also kill off all the coral within a radius of several hundreds of meters,” says Mr Vlak. The DES technique creates very little turbidity; this is extremely important when there is a vulnerable underwater life like coral present in the area. He has a film clip showing fish continuing to swim normally around the ROV and the grab during dredging.