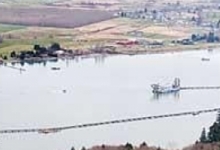 Despite criticism from environmentalists, the $200 million Columbia River channel deepening project generated over $1 billion in capital investments since its completion five years ago, port officials and terminal operators say.

In a new report released by Port of Portland and Pacific Northwest Waterways Association, consultants studied the economic impact of the project that deepened the Columbia River from 40 to 43 feet.