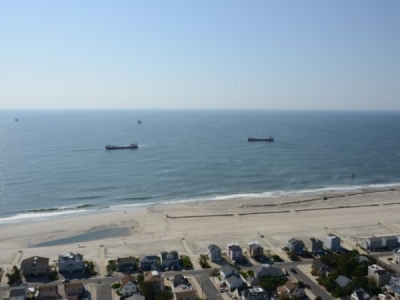 A Trump administration proposal to vastly expand federal conservation land along the East Coast is facing protests from states and communities that say the plan will damage tourism industries that are still recovering from Superstorm Sandy in 2012.

The dispute is unfolding from Maryland to Massachusetts as officials and homeowners object to a plan by the Fish and Wildlife Service to add 275,000 acres to a federal protection zone. It’s one of the largest expansions of the Coastal Barrier Resources System in its 37-year history.

The expansion will strengthen the East Coast’s “resiliency and sustainability” following Sandy, which killed 72 people in the U.S. and caused $65 billion in domestic damage, the agency says.

The epicenter of the battle is the New Jersey shore, where expanded conservation areas would interfere with beach replenishment and protection projects essential to sustaining the legendary tourist destination, state and local officials say.

“New Jersey generates billions of dollars from tourism and property values. Everybody benefits from this,” said Scott Wahl, Avalon Borough’s business administrator, referring to beach-refilling projects in his southern New Jersey seaside community. “This is not to benefit a bunch of rich people who live along the shore.”

The controversy recently drew in Rep. Jeff Van Drew, a Democrat representing southern New Jersey. He wrote a letter March 14 imploring FWS to let shore communities continue to dredge sand from a federal conservation area to refill nearby beaches that are constantly eroded by tides.

Environmental advocates are pushing back with warnings about the possible ecological damage from beach replenishment projects that they call “sand mining.”

“These sand removals have an impact on fish habitat, fisheries that depend on the habitat and wildlife,” said Karen Hyun, head of coastal conservation for the National Audubon Society and a former senior FWS official. The Audubon Society released a study last week saying the protection zones have saved federal taxpayers $9.5 billion in disaster aid by keeping coastal areas clear of buildings, roads and infrastructure.

David Conrad of the Association of State Floodplain Managers, which supports the proposed expansion, said it will conserve flood-prone land.

The dispute centers on the federal Coastal Barrier Resources System, a politically popular program that aims to limit development in environmentally sensitive coastal areas that provide fish and wildlife habitat and protect inland communities against storm surges. Created in 1982, the coastal system has grown to include 3.5 million acres, mostly along the East and Gulf coasts, but also in patches along the shores of all five Great Lakes and in Puerto Rico and the U.S. Virgin Islands.

The program does not prohibit development but discourages it by making areas inside the coastal system ineligible for most federal money and programs.

On the Jersey Shore, residents and officials fear losing support of one critical federal agency: the Army Corps of Engineers, which does beach restoration and protection projects around the nation.

The Army Corps has been helping rebuild and protect New Jersey’s vulnerable coastline since the 1960s, said Patrick Rosenello, the mayor of North Wildwood, a coastal city of 4,000 people whose population surges to 69,000 in the summer. Project costs are typically split among the Army Corps, the state and a municipality.

In 2005, the Army Corps built a sea wall stretching a mile and a half along North Wildwood’s beach and agreed to make storm-related repairs for 50 years. The sea wall runs north-south along the Atlantic coast. At the city’s northern edge, it curves inland and abuts a shallow inlet that sits inside a section of the Coastal Barrier Resources System known as NJ-09.

In March 2018, FWS published a map showing that it planned to expand NJ-09 slightly to include the area containing the sea wall. The minor shift has major implications.

“This expansion would take the Army Corps of Engineers out of their role of helping to maintain their project,” Rosenello said.

Rosenello and two neighboring mayors wrote to FWS in July urging revisions to NJ-09 that would let the Army Corps repair North Wildwood’s sea wall and take sand from the protected inlet to restore beaches of Avalon and Stone Harbor Borough.

Avalon and Stone Harbor would remain outside NJ-09 under the proposed expansion. But they fear that if the Army Corps cannot use sand from next-door Hereford Inlet for beach restoration, the agency would have to dredge sand from an unprotected inlet several miles away, costing millions of dollars more.

“There are several million cubic yards of sand sitting unused in Hereford Inlet that can and should be used for resiliency and protection of lives and property,” said Wahl, the Avalon business administrator. Avalon, North Wildwood and Stone Harbor are major attractions in Cape May County, where tourism accounts for nearly half of the jobs, generates $6.4 billion in sales and boosts the population from 94,000 to 750,000 in the summer, according to the New Jersey Division of Travel and Tourism.

FWS said in an email to E&E News that it is “considering modifying” its proposed expansion of NJ-09 “to ensure that the existing structure [sea wall] is not included.”

The Army Corps and the New Jersey Department of Environmental Protection have joined in objecting to the FWS proposal to expand federal protection zones across the New Jersey coast. “We cannot support the expansion,” the department said in a 20-page letter to the agency in July, citing potential harm to the state’s tourism and shellfish industries as well as to planned road construction projects.

Stewart Farrell, director of the Coastal Research Center at Stockton University in New Jersey and a consultant to local communities, said that barring federal money from being spent on beach restoration deviates from the intent of the Coastal Barrier Resources Act. “They didn’t want federal dollars to encourage development. But this is not encouraging development. It’s protecting what’s already there,” Farrell said.

Elsewhere on the East Coast, state and local officials from Delaware, Maryland, Massachusetts and New York have objected to segments of the plan that affect tourist destinations such as Fire Island, N.Y., and Provincetown, Mass.

Supporters include the Natural Resources Defense Council, the Association of State Floodplain Managers and the Audubon Society. They note that communities could continue to replenish their beaches without federal money.

“It’s putting the onus on state and local government,” said Hyun of the Audubon Society.

The expansion project began one year after Superstorm Sandy, when the Interior Department, which oversees FWS, gave the agency $5 million to review the federal protection zones in the nine states most directly affected. Those states are Connecticut, Delaware, Maryland, Massachusetts, New Hampshire, New Jersey, New York, Rhode Island and Virginia.

The review is part of a broader, long-term project ordered by Congress in 2006 to analyze the entire Coastal Barrier Resources System, suggest areas that should be added or removed, and correct errors in the maps that define the protection zones. Congress must approve any changes to the system’s geographic boundaries.

FWS told E&E News that it expects to propose the revisions to Congress in 2020.

Wahl of Avalon and Rosenello of North Wildwood said that if Congress approves the expansion of NJ-09, they will take their fight to federal court.

Reprinted from Climatewire with permission from E&E News. E&E provides daily coverage of essential energy and environmental news at www.eenews.net.