CMP Looking into Relocation of Its Container Terminal 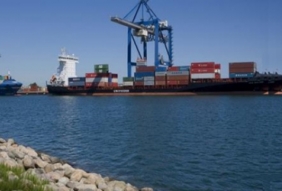 CMP, operator of the container terminal in Nordhavn, Copenhagen has signed a letter of intent with the Port of Køge to explore the possibilities for future cooperation on relocation of CMP’s container terminal.

The current master plan from 2009 for the development of the Nordhavn port area in Copenhagen outlines that the present location of the container terminal in Nordhavn is not a long-term alternative. Consequently, an investigation was initiated during the spring of 2015 to assess the options regarding a potential relocation of CMP’s (Copenhagen Malmö Port) container terminal.

The Port of Køge, which has over the recent period developed its seaport and a major logistics center called Scandinavian Transport Center, approached CMP regarding a possible relocation of the future container terminal to Køge.

Additionally, the recent port expansion will be creating new port areas and a considerably greater water depth in the Køge port.

“It’s essential for us that the future location of the container terminal continues to provide the best conditions to serve our area and our customers. The Port of Køge, with its central location, improved port conditions, and good infrastructure is an interesting alternative to the current location of the terminal in Nordhavn. Therefore, the Port of Køge and CMP have signed a letter of intent to explore the possibility of locating a container terminal in the Port of Køge with CMP as tenant and operator,” Johan Röstin, CEO of CMP, says.

“In recent years, many companies have chosen to locate their business in Køge because they rely on an efficient infrastructure and business conditions that secure their future operation that are future oriented. We can offer these prerequisites in our logistics- and transport cluster in Køge. On top of that, we know that around 80 percent of the containers currently handled at the terminal in Nordhavn are starting or ending their journey south of Copenhagen, and therefore it is quite natural to look for an alternative and more convenient location,” Thomas Elm Kampmann, director of Port of Køge, says.

The exploration of the cooperation opportunity will be carried out over the next six months.

The development plans for Nordhavn allow for a relocation of the container terminal to Ydre Nordhavn (the Outer Northern Harbour).