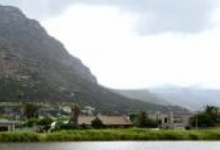 The city council said maintenance teams from its Environmental Resource Management and Transport division had commenced with the dredging operation of the sand bar at the mouth of Zandvlei as part of the necessary rehabilitation action of the estuary which was an important estuarine nursery area for fish.

In a statement, the City said: “The build-up of sand in the estuary has occurred over the past 40 years. Although the accumulation of sand has at times been interrupted by past dredging operations, it has been building up, especially over the past decade.

“The extra sediment has reduced flow and depth to the point where it restricts movement of fish into and out of the estuary and may increase the risk of flooding upstream. It also reduces the flushing of excess nutrients out of the estuarine system.”

The City said the accumulation of sand was the direct result of the rubble weir at the mouth of the estuary which, amongst others, had needed to be constructed to protect the sewer line.

The City explained that in a natural system, sand brought in by wave action tended to accumulate during summer while in winter, scouring during storms far outweighed sand input by wave action. Estuary mouths also tended to migrate laterally as part of the process and the result was that the depth of an estuary, particularly near the mouth, tended to fluctuate between deep and shallow phases.

“The weir slows the speed of flow at the bottom of the estuary quite severely, thereby reducing scouring and causing a net accumulation of sediment,” the City said. “The dredging operation, if continued every few years as needed, will assist to ensure the estuary functions.”

The City said the dredging operation would have a short-term negative effect on benthic creatures such as prawns, crabs and bloodworms.

“The strategic parts of the sand bar will be left as holding areas for the purpose of the re-colonisation of any affected creatures,” it said. “It is expected, however, that any populations that could be affected will recover quickly, as has been the case in past dredging operations.”

Sediment would be stored on both banks while drying and would then be removed for use in projects elsewhere as needed. A rehabilitation plan was also in place for banks that were damaged during operation of the dredging equipment, and these would be restored to a better condition than at the start of the project.

The City added that the dredging activity would be phased across a number of financial years, with the first phase set to include the removal of approximately 2 000 m³ of sand.