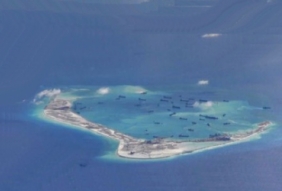 China said on Thursday it will host defence ministers from the Association of South East Asian Nations (ASEAN) next month, amid tension between some of its members and China over the disputed South China Sea.

Chinese Defence Minister Chang Wanquan will have a “deep exchange of views” with participants, he added, without elaborating.

China has overlapping claims with Vietnam, the Philippines, Malaysia, Taiwan and Brunei in the South China Sea, through which $5 trillion in ship-borne trade passes every year.