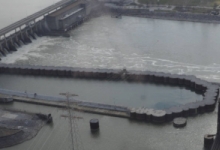 Three years after work stalled on a new lock at the Chickamauga Dam, construction should resume on the $860 million project by the end of the year using revenues generated by a new barge fuel tax Congress adopted last year.

The U.S. Army Corps of Engineers Wednesday released $3 million of the $6 million left over in its Inland Fund to award a contract for additional work on the cofferdam and lock walls erected beneath the 75-year-old dam in Chattanooga.