Champlain Canal State Dredging Plan Back to Drawing Board 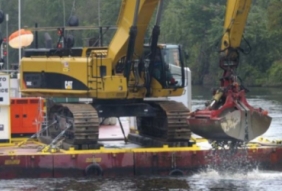 The cloudy future of the PCB-tainted Champlain Canal just got a little more uncertain. The state Canal Corp. has scuttled its 3-year-old plan to dredge toxic PCBs from the crippled canal on the Hudson River and is crafting a new plan for review by the federal government.

Canal officials met in July with officials from the Army Corps of Engineers to reveal “substantial changes” to a 2012 canal dredging permit application to the Corps, said Corps public relations specialist Hector Mosley on Friday.

Due to those changes, which Mosley said he could not describe, the state must start its canal dredging permit process over again, with a new application outlining the new plan. “We have not received any application at this time,” said Mosley.

The new Harbor Commission President for the Port of Long Beach ushered in the start of her term by outlining environmental, community, and workforce goals for the year. As head of the board that sets policy for the port, on 11 August Sharon L. Weissman said she wants to sharpen the port’s environmental focus. Weissman noted the… Read More

The ocean has carved up the sand in Flagler Beach, creating a steep drop-off north of the pier and also chewing away at the beach in places south of the pier, worrying city officials. The Flagler Beach City Commission during an emergency meeting last week decided not to hire an engineer to look into the problem… Read More

Work on design and build of Sh. Lhaimagu Harbor Development Project is well underway, states Maldives Transport and Contracting Company (MTCC). MTCC states that 54 percent of the overall work of the project is now completed. The company highlights that the installation of precast concrete blocks for quay wall construction is ongoing, with 70 percent… Read More

Joint Base Langley-Eustis’ (JBLE) Third Port, the US Army’s pier complex sitting where Skiffe’s Creek meets the James River in south-eastern Virginia, recently completed a multi-month dredging project. The dredging, a 24/7 operation, was part of a regularly scheduled maintenance, which occurs every five years. Jay Dehart, a harbourmaster with JBLE US Air Force tenant… Read More