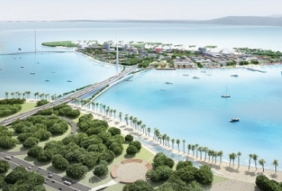 Under the contract, worth just over $534m (RM2.320bn), CCCC’s newly formed Malaysian subsidiary will dredge to reclaim 891 acres for phase 2 of E&O’s Seri Tanjung Pinang development, which E&O says is the island’s first masterplanned seafront development – “a highly sought-after and thriving community to locals as well as expatriates from over 20 nationalities”, the company said.

“To select the reclamation contractor, we went through an extremely rigorous tender process that included the pre-qualification of potential contractors prior to the tender submission,” said E&O group managing director, Dato’ Seri Terry Tham Ka Hon.

The company said efforts to secure financiers for the project will be finalised soon.

Start of work at the site, on the west coast of Peninsular Malaysia, is “targeted by the year-end”, the company said.