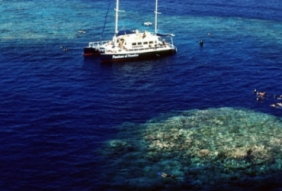 The Queensland government has ruled out major development of a port in Cairns that would jeopardise Australia’s pledge to to limit industrial impacts on the Great Barrier Reef.

A parliamentary committee on Tuesday recommended the government consider making Cairns a “priority port”, which would pave the way for capital dredging to enable shipping channels.

But the minister for state development, , said the government would not waver on its commitment to limit industrial development to four other ports as part of its conservation plan to keep the reef off the world heritage “in danger” list.

“I appreciate the committee’s consideration of the [sustainable ports development bill] and their report will be considered in full and in detail,” he said. “However, the government will not divert from elements of the bill which form part of our Reef 2050 plan.

“The Queensland and committed to Unesco for only four priority regional ports, and that commitment must stand.”

The infrastructure, planning and natural resources committee moved unanimously for the government to consider adding Cairns to the “priority” list, weighing up the economic benefits to the region beside impacts on the reef and its commitment to Unesco.

The UN’s world heritage committee decided last month not to list the reef as in danger but noted that “restrictions on port development and its associated activities such as the disposal of dredged material” were among promises that “require translation into legislation”.

“The world heritage committee welcomes … limiting capital dredging for the development of new or expansion of existing port facilities to within the regulated port limits of the major ports of Gladstone, Hay Point/Mackay, Abbot Point and,” it said.

“It would be a breach of trust and a significant risk to the world heritage status of the reef were Queensland to go back on its commitment and expand its priority ports from four to five,” Leck said.

“What the ports bill does is protect Cairns from becoming an industrial mega-port.”

The bill would not prevent dredging for a cruise ship terminal but the cost of disposing of seabed waste onshore, as required by law, is estimated to run to hundreds of millions of dollars.

In a submission to the parliamentary committee on the bill, said restrictions on development in areas such as Cairns “will be detrimental to the Queensland economy, particularly in regional areas”.

A group called Friends of the Port of Cairns claimed that deepening the shipping channel could add $5bn to the local economy over 25 years.

“In fact the opposite is true – listing Cairns as an industrial priority port like Gladstone or Abbot Point will send the wrong message to potential tourist visitors and could have negative impacts on the economy.”