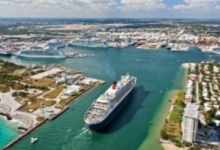 ’s Port Everglades has received a new report that clears the way for it to begin the next phase of deepening and widening its channels.

The signed report that officials received last week from the also allows the project to be included in federal legislation expected in 2016 that will authorize similar water and navigation-related projects.