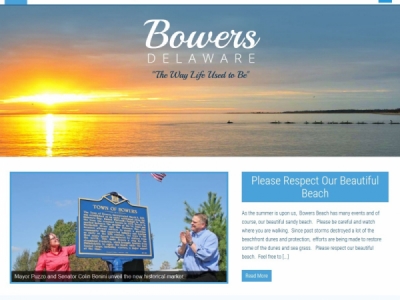 BOWERS BEACH — There has been a parade rolling through Bowers Beach over the past week.

It wasn’t in celebration of St. Patrick’s Day or the arrival of spring, rather, it has a constant stream of dump trucks delivering loads of sand for a beach replenishment project that is taking place in the town just a few miles south of Dover.

The Delaware Department of Natural Resources and Environmental Control’s Shoreline and Waterway Management Section, within the Division of Watershed Stewardship, has already completed beach replenishment projects at Pickering Beach and Kitts Hummock.

It has now focused its work at Bowers Beach, where sand is being trucked in from an inland source and is ex-pected to be completed prior to April 15.

Replenishment consists of truck-hauled fill projects managed by DNREC. Bayshore beaches in the three downstate communities were chosen for winter replenishment after experiencing significant loss of sand this year due to erosion from Delaware Bay tides and waves.

“This is a timely bipartisan response by the legislators and a state agency to address the environmental and economic con-cerns of Delawareans and Delaware communities, who are experiencing beach erosion impacts related in part to sea-level rise,” Gov. John Carney said. “DNREC’s replenishment work will en-sure that their concerns are eased, and that our environment and coastal economy are made more resilient.”

Beaches and dunes in Bowers Beach, Pickering Beach and Kitts Hummock were given priority for replenishment based upon on-going monitoring by the Shoreline and Waterway Management Section.

“DNREC’s shoreline management section charts the most vulnerable coastal areas for infrastructure impacts, and the three communities that (received) replenishment this winter checked all the boxes in our monitoring process,” said DNREC Secretary Shawn M. Garvin.

“DNREC expects that our work will benefit from efficiencies gained during previous replenishment projects we provided for these same communities.”

Past beach and dune repair work in the three communities in-cludes similar truck-hauled beach fill projects in Bowers Beach in 2009, 2012 and 2018; Kitts Hummock in 2010, 2012 and 2014; and Pickering Beach was last replenished in 2001 using a hydraulic dredge.

Beach fill projects introduce clean sand into the shoreline system to offset the effects of erosion.

The beach and dune are an im-portant line of defense between the Delaware Bay and inland public and private infrastructure, including houses, roads, and sewer pipes.

The Delaware Bay beaches and dunes also provide valuable habitat to an array of plants and animals.