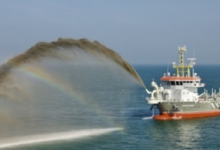 (Boskalis) has been awarded three dredging-related contracts in Africa with a combined value of approximately $83.9m.

In Angola, Boskalis has been awarded a contract by Angola LNG for dredging activities related to maintaining the access channel and turning basins of the Soyo LNG port. The project will be executed in joint venture and involves the removal of approximately 11m cubic metres of sand and silt. Work is set to commence in the third quarter of 2015 and will be completed by the end of 2017. Boskalis also executed the initial capital dredging and reclamation works for this LNG port on behalf of Angola LNG from early 2007 until mid-2009.