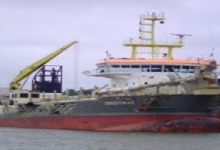 The UK’s Defence Infrastructure Organisation (DIO) has awarded a £31m contract to for capital dredging works on the approach channel to Portsmouth harbour.

The works are in anticipation of the first of the ’s new Queen Elizabeth Class (QEC) aircraft carriers, HMS Queen Elizabeth, being commissioned in 2016. At 280m long and with an 11m draught, the two 70,600 tonne displacement vessels will be the largest warships to be based at Portsmouth in its eight century history as a Royal Navy base.