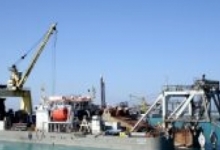 Royal Boskalis Westminster had a good first quarter of 2015, reporting increased revenue compared to the same period in 2014. Revenue was stable when adjusted for acquisitions, divestments and currency effects.

The Netherlands headquartered marine services giant reported revenue in its Dredging & Inland Infra segment was comparable to the first quarter last year despite the divestment of road maintenance company De Jong in early February. Large projects in progress include the expansion of the Suez Canal in Egypt, port developments in India, Brazil and Qatar and the reinforcement of the Hondsbossche and Pettemer Sea Defense in the Netherlands. The operational performance of the projects was generally good and the reported margins were at a comparable to a year ago.