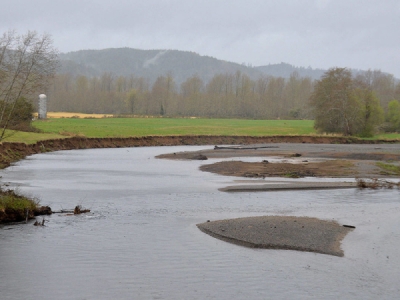 Louis Krauss | Grays Harbor News Group The Satsop River is the likely target of a dredging and floodplain management project as part of a bill in the state Legislature.

An amendment to a bill designed to build up salmon runs in order to provide more prey for orca whales, might also help Satsop River area farmers who have lost land to the river.

The main purpose of House Bill 1579 is to increase Chinook salmon abundance as encouraged by the state’s killer whale task force, which wants to improve the salmon populations to help provide more food for the killer whales, a population under great stress.

The amendment to HB 1579 proposes three river dredging projects, one each in Grays Harbor, Snohomish and Whatcom counties, intended to reduce the threat of flooding and study whether that improves salmon habitat.

Sen. Kevin Van De Wege, D-Sequim, who proposed the amendment, said it’s not certain but that the Satsop was very likely to be the river chosen in Grays Harbor County.

“It’s by far the worst river as far as this issue is concerned,” said Van De Wege. “It’s going over its banks often, gravel built up is forcing the river to go in other directions, wiping out farmland, impacting county roads, I think a PUD road is close to being impacted.”

The project would mainly consist of dredging in the main channel of the river, which Van de Wege said would not likely take place upstream where salmon are spawning. The idea would be by removing gravel from the river, it would be less likely to flood and test if it improves conditions for salmon, Van De Wege said.

“The Satsop had a long history of dredging but, since the dredging stopped, the buildup of sediment has clogged the river’s main channel,” said Van De Wege, chair of the Senate Water, Agriculture, Natural Resources and Parks Committee. “As a result, flooding has become an increasing threat to area homes, farms and businesses.”

The amendment voted for by Van De Wege and others would allow for the three demonstration projects in the three rivers, must examine “setting back levees, providing fish habitat, removing excess sediment and gravel, protecting treed riparian zones, and providing stable river banks.”

Rep. Brian Blake, D-Aberdeen, said his idea would be to create a second “braid” in the stream, diverting it to split and go to nearby ponds which improves fish habitat by increasing the number of river miles.

Blake said he has heard from many farmers and community members in the 19th Legislative District about how the Satsop’s flooding and erosion has had major negative impacts in the past. He believes the proposed projects can benefit all areas like improving fish habitat, protecting farmland and private property, and protecting public infrastructure.

“If done right, I think there’s an opportunity for this to be a big win and something that would improve the habitat, create more stream miles by braiding the stream, and simultaneously protect farmlands, private property, and public infrastructure,” Blake said.

Van De Wege said it looks likely the bill will pass as amended with the floodplain projects.