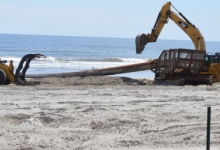 A beach replenishment project for the south end of Ocean City was getting started back up this week when fresh mechanical problems shut it right back down.

Ocean City typically tries to avoid mid-summer beach projects, which inconvenience vacationers and when summer crowds present the contractor with increased logistical problems. The southend replenishment was set to be completed by mid-July, but problems with the dredge halted the work at the end of May. The dredge was only recently returned to the area, and the contractor, Great Lakes Dredge & Dock Co. of Illinois, was rebuilding the pipe to carry a slurry of water and sand to the beaches from what’s called the borrow area.

Pearsall believes the dredge had begun to pump sand again when the mechanical problem arose.

City officials were not immediately available for comment on Tuesday.

After work was halted in the spring, the estimated completion date was moved from mid-July to early September.

A contract for the project was awarded in November 2014 and dredging started April 16. It was about 40 percent complete when the dredge went down the first time.

The project had moved from the first stage of the pumping between 36th and 49th streets, to the second stage between 49th and 59th streets. By the end of May, the project was nearing 51st Street.

The dredge returns was set to continue pumping north from 51st to 47th streets through early August, then pump south from 55th to 59th streets to complete the project.

The last remnants of the 59th Street Fishing Pier were removed as part of the project, and lifeguards in the area expect the replenishment to bury much of the landmark stone jetty there as well.

Beachgoers in the south end of Ocean City have long advocated for a federal beach replenishment project in the area. Since the 1990s, the north end of the island has been under a 50-year commitment from the Army Corps to periodically replenish beaches there. This project marks the beginning of a similar long-term commitment to the south end. Typically, the state and city would share in the cost of the project, but this time the federal government is picking up the entire tab under Hurricane Sandy recovery funds.

In addition to the south end of Ocean City, the $57.6 million project also includes reconstruction of the beaches in Strathmere and , which had also been put on hold, but is back under way this week, with pumping in the Whale Beach area.