Beach Replenishment Update: 39 Percent of the Way There 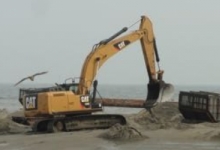 Check OCNJ Daily for updates and photos of the Ocean City beach replenishment project for 2015 in the south end between 37th and 59th Streets.

PROGRESS: As of Thursday afternoon, work had not reached 51st Street yet but was getting very close. Access to the beach at 52nd is closed. Access to 53rd Street from the street is blocked (awaiting work on the dune crossover), but the beach at 53rd Street is open and accessible from 54th. Ocean City Business Administrator Jim Mallon reported Thursday that 39 percent of the projected volume of sand for the project has landed on the beach since the project started on April 16. The project is on schedule to be completed by mid-July.