Beach Replenishment in Beach Haven to Begin in January 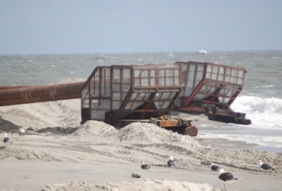 State and federal officials announced during a stand-room-only meeting in Beach Haven that a beach replenishment project in the borough would begin in January. At the same meeting, they announced the results of a large-scale study conducted in Long Beach Island communities that have already received replenishment sand that largely debunks one of the arguments opponents of replenishment have put forth.

Work on the replenishment project in Beach Haven will begin approximately Jan. 1, 2016 and last 100 days, said Bill Dixon, manager of the Bureau of Coastal Engineering within the state Department of Environmental Protection.