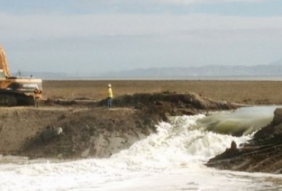 The largest private environmental restoration project in the Bay Area reached a major milestone this week with the breaching of a levee that will allow the San Francisco Bay to expand northward, restoring marshland and wildlife while also providing protection against sea-level rise.

As several hundred people looked on October 25, an earthmover toppled a levee at the Sears Point Restoration Project in southern Sonoma County, allowing water from the San Pablo Bay to begin pouring in restoring marshland, a key chapter in a multi-year Sonoma Land Trust project intended to restore nearly 1,000 acres of tidal wetlands.

The breaching of the levee, which effectively connected the basin to the San Francisco Bay, is seen as key to protecting low-lying areas against anticipated sea-level rise.

“The major benefit everyone is talking about is that it is providing additional tidal wetlands as sea levels rise,” said Sahrye Cohen, a regulatory project manager in the Corps’ San Francisco district, who has overseen the project.

“It will be a buffer in the bay, creating more tidal marsh habitat to account for the fact that we know that we are going to lose more down the line,” Cohen said, because of rising oceans.

The U.S. Fish and Wildlife Service is the lead federal agency on the project but under the Clean Water Act, the Corps of Engineers is required to approve the excavation for tidal marsh and wetland restoration.

With the breaching of a levee that had been in place for more than a century, what had been largely mud is now expected to be transformed into a revitalized habitat for vegetation and wildlife.