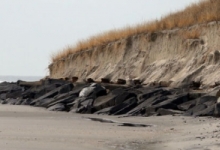 By Cindy Nevitt, Press of AtlanticCity.com

A $6.3 million beach replenishment project to restore severely eroded north-end beaches in the borough started over the weekend at Eighth Street, three weeks later than anticipated. The project, funded by the borough, will build up beaches between Eighth and 26th streets with as much as 700,000 cubic yards of sand.

Originally scheduled to start in early June and end June 29, the project was delayed by repairs to the dredge and bad weather prior to its arrival in the borough. The dredge Illinois had been working in the Strathmere section of Upper Township up until June 15. It started pumping sand in Avalon on June 20.