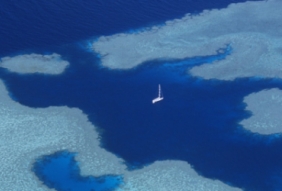 Australia will soon be home to one of the world’s biggest coal mines, now that the government has given its approval for the controversial project.

This week, Australia’s government approved the Carmichael mine, a project that’s backed by India’s Adani Enterprises. Environmentalists have staunchly opposed the mine, which will be located in central Queensland, because they say the increase in coal shipping that the mine will spur threatens the Great Barrier Reef. And, they say, the emissions that will come from burning the coal will contribute to the ocean warming and acidification that’s already threatening the reef.

“Carmichael would be a complete disaster for the climate and the Great Barrier Reef,” Greenpeace Australia campaigner Shani Tager said in a statement Thursday. “The federal government and Environment Minister should be in the business of protecting the Reef and the climate, not giving mining companies licence to destroy them. This project means more dredging in the Great Barrier Reef, more ships through its waters and more carbon emissions.”