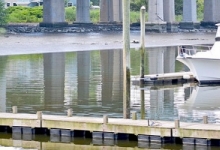 Cos Cob Harbor and the Mianus River, which have seen their share of both commercial and pleasure boats over the past two centuries, will be getting a much-needed dredging in 2016.

The Army Corps of Engineers will dredge Cos Cob Harbor from buoy No. 9, just outside the Riverside Yacht Club, all the way up to Route 1, the Post Road. The harbor channel was last dredged in 1985, and since then large amounts of silt and sediment have accumulated, sometimes making passage difficult when the tide goes out.

By law, the channel needs to be six feet deep at low tide. “There are places where it’s two feet, three feet,” said Frank Mazza, chairman of the Greenwich Harbor Management Commission. “The upper part of the river is the worst part, so the Army Corps deems that it should be dredged. There are about 60,000 cubic yards of material that needs to be removed.”