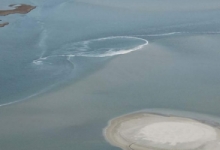 Though sea level rise has claimed about 300 acres of island habitat in Maryland according to Roman Jesien, acting co-director of the coastal bays program, four have been restored by dredging spoil by the Army Corps of Engineers.

With recovery money, the Corps have been conducting dredging operations in and around the bays for years, and while most of the time the salvaged material is deposited on the beach, it is sometimes put to other uses, such as building islands.