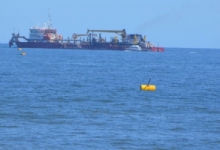 Officials expect the Liberty Island to be back in New Jersey and pumping sand onto Ocean City beaches by Friday, July 31, according to an Army Corps of Engineers spokesman.

The ongoing beach replenishment project for the south end of Ocean City was halted for a second time this week, after a mechanical problem was discovered with the Liberty Island dredge, which had recently been returned from Norfolk, Va., where it had been shipped for repairs. The pipes had been returned to the beach and work about to restart when it was halted again for a mechanical problem.