Argentinian Firm in Deal with Damen for Tug, Dredger 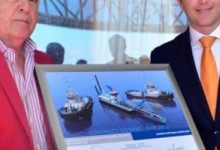 The two vessels and dredger are to be used in the Argentinian terminal region around Rosario on the Paraná river for towing, mooring, fire-fighting and dredging operations, said a estaminet.

The equipment is scheduled to be delivered in the third quarter of the year, accorindg to Alex Westendarp Knol, Damen area manager .

The ASD tugs, which will be built at Damen Shipyard Galati in , are both classed under , equipped with Fire Fighting 1, which delivers a water spray of 2,400 cu m per hour. Their basic functions entail towing, mooring and fire-fighting operations.

The tugs, which are compact and easy to handle, will be fitted with two Rolls Royce US 205 azimuth thrusters.

The diameters of the suction pipe and discharge pipe will be 550mm and 500mm respectively and the cutting power of the cutter will be 180 kW.

The vessel will be fitted with a Caterpillar 3512B dredge pump diesel and a Caterpillar C12 TA auxiliary diesel. The basic functions of the dredger will be capital and maintenance dredging. The CSD 500 is a modular design which can be easily disassembled for transportation anywhere in the world. Upon reaching its destination, the CSD 500 can be reassembled with locally sourced small cranes.

“The client had a very clear operational plan. They knew that our tugboats are last-generation vessels designed for harbour assistance and emergency operations, fitted with first-class fire-fighting equipment,” said Knol.

“The dredger is able to operate in water depths up to 16m, which is 2m more than the standard version of this vessel. I am very pleased to say that La Cooperativa opted for Damen. We will do our utmost to assist them in reaching their goals in the region,” he said.

Herme Juarez, president of the Cooperativa De Trabajos Portuarios, said: “The tugboats will be named ‘Estibador I’ and ‘Estibador II,’ after the stevedores (‘estibadores’ in Spanish) who are working hard every day and who embody the culture of the harbour work.

“The dredger is named ‘La Portuaria”, (representing ‘a safe haven’) as homage to the wives of all the stevedores. We are very confident in our decision to choose Damen and we do not rule out doing more business with them in the near future.”