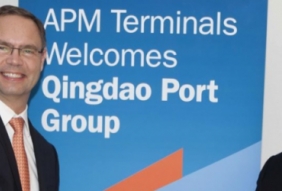 The newly developed Qingdao Port Dongjiakou Multi-Purpose Terminal, in which APM Terminals will hold a 20% share, is located on China’s Bohai Rim in the Shandong province, on the Yellow Sea.

Qingdao’s new Dongjiakou Port area is set to become a national hub of Chinese bulk and energy cargos, with a projected volume of more than 300 million metric tons handled annually in this new complex.

The Qingdao Port Dongjiakou Multi-Purpose Terminal, operated by Qingdao Port International and APM Terminals, will cater to the rising demand of grain and other general cargo and allow for improved port logistics service into the hinterland markets.

APM Terminals’ Chinese presence includes interests in nine operating terminals in six ports, with a seventh facility currently in development at the port of Ningbo.