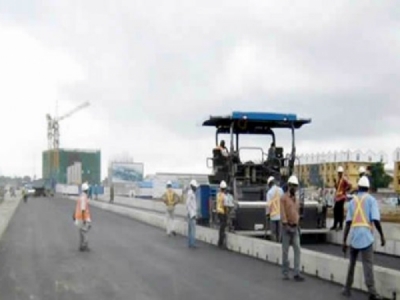 The reconstruction, which ignited the chronic and dreaded gridlock at Apapa began two years ago, and defeated all solutions, including the Presidential directive of a 48hour to free the road, after an earlier directive of the Lagos Government failed.

The road is been reconstructed through Public Private Initiative (PPI) by AG Dangote, supervised by the Federal Ministry of Works and Housing, from funds raised by the Dangote Group, the Nigeria Flour Mill and the Nigerian Ports Authority (NPA).

Speaking on the development, Terminal Manager Hull Blyth Nigeria Limited, Mr Donald Obilonu, said the completion of the road would bring relief to transporters, who were hitherto worse hit by the bad conditions of the road.

According to him, the bad nature of the port road had made transporters to increasing haulage fare above 100 per cent, a situation that had pitched them against operators and regulators most times.

“They keep saying that the tear and wear the trucks are subjected to on the bad road and coupled with delays that trucks encounter in getting to port, that in most cases then takes up to a whole week, made them to hike fares, ”Obilonu said.

The manager, who expressed excitement on the commencement of construction on the Tin Can port road, said that port users would be most grateful to see it completed on time.

On his part, Port Manager, Bhosource Business Support Services Limited, Mr Francis Odusanya, said that the completion of the road would fast track businesses at the port.

“As an investor most of the factors and variables one plots in as a result of the traffic congestion and its attendant unforeseen expenses will be off the radar,” he said.

A Terminal Manager with ENL Consortium Limited, Mr Andrew Young said there has been improvement in accessing the port since mid- December when trucks were allowed to use the road.