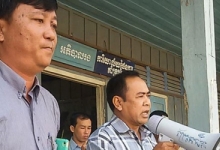 By Aun Pheap, The Cambodia Daily

of about 100 villagers and activists in on Wednesday said they decided to temporarily halt their campaign against two sand-dredging companies because a group of suspected agitators had appeared in the area.

Over the past four days, the protesters have been attempting to stop Rainbow International and Direct Access from dredging sand in district’s Andong Teuk estuary, accusing the firms of polluting the local water system.