And Now for More Dredging 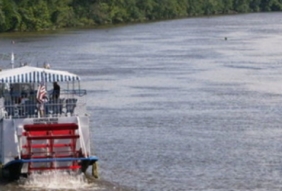 As one dredge falls silent, another one is about to start up.

The state Canal Corp. has applied for a permit to dredge the Champlain Canal portion of the Hudson River, an undertaking that has been on hold since 1980. The project is expected to be far smaller in scale than the General Electric dredging in the area, using far fewer boats and dredging only a small part of the river at a time. The agency would use its own processing plant to handle the PCB-contaminated material, not GE’s dewatering facility in Fort Edward, according to the EPA.

The Canal Corp. has not yet announced a date or made public its plans, but the Army Corps of Engineers has approved the permit request, according to the EPA.

“They could begin the dredging whenever they decide to do it,” said Gary Klawinski, the EPA project director for the General Electric dredging project in the river.

The Canal Corp. dredging will be in the same area: the 40 miles from Fort Edward to Troy.

The goal is to make the canalway deeper so that large recreational boats and possibly commercial traffic could more easily navigate the river. The deep canal trough in the center of the river naturally fills with sediment over time, according to the Canal Corp.

The agency does regular “maintenance dredging” in the rest of the canal system, keeping the canal deep enough for ships.

But the sediment in the 40-mile section from Fort Edward to Troy is contaminated with PCBs, making the process much more difficult and expensive.

Some of the expense has already been borne by GE.

“We took a lot of material out of the navigational canal through our dredging,” Klawinski said.

The remaining sediment is still contaminated, but not at levels high enough for the required GE dredging, he added.

But the company will likely not use GE’s dewatering plant in Fort Edward, which is about to be dismantled.

The company only asked to use the wharf at the plant, which was built on land owned by the canal, Klawinski said.

He doesn’t expect them to need “elaborate facilities” for the dredging.

“If they do it the way they normally do it (in areas not contaminated with PCBs), they’ll prioritize and do the worst sections first and a little at a time,” he said.

For that, the agency could use smaller facilities it already owns, he said.

The agency has not made its dredging plan public and declined a request to do so Friday. Klawinski said he hasn’t seen the plan either, although it was submitted to the Army Corps of Engineers. He’s confident it will include all the safety measures the EPA developed while managing the GE dredging project.

“They were so involved with our work that I think they would be aware of these things,” he said.

The plan doesn’t have to be made public. And unlike GE, as it works toward dismantling its dewatering plant, the Canal Corp. doesn’t have to wait for comments from the public or get the EPA’s approval.

“I don’t have to approve their plan,” he said.

Before GE began dredging, there were areas where the canal was only 3 feet deep, according to the Canal Corp.

Even now, the canal can’t accommodate some ships.

“The bigger sailboats have fixed keels that can’t be raised,” Klawinski said. “We see a lot of people coming through the Champlain Canal. Keeping that open is really nice.”