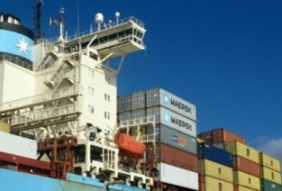 South Carolina‘s ports are embarking on an ambitious five-year plan that will see the Charleston shipping channel deepened, a new container ship terminal come on line, a new rail transfer terminal begin operating and continued planning for a massive new container terminal the state will operate with Georgia.

The agenda for the ninth-largest container port in the nation was outlined this month in the latest State of the Port message by Jim Newsome, the chairman and chief executive officer of the South Carolina Ports Authority.

An estimated $1 billion needs to be invested in port infrastructure projects during the next five years to keep the South Carolina Ports Authority competitive, Newsome said. That money includes such things as spending on a new container terminal in North Charleston, buying bigger cranes and strengthening the wharfs at the authority terminal in Mount Pleasant to handle larger ships.

The deepening of the Charleston Harbor shipping channel to 52 feet is expected to be completed in 2020. The $510 million deepening is needed so the harbor can handle a new generation of larger container ships. The U.S. Army Corps of Engineers gave key approval to the project this month, opening the way for engineering studies and for getting money from Congress to help pay for part of the work.

South Carolina’s $50 million inland port, which opened two years ago, has been a success and will likely need to be expanded in 2017, Newsome said. There are about 60 acres at the 100-acre site near Greer that can still be developed. The inland port provides a direct rail link between the Upstate and South Carolina Ports Authority terminals on the coast. It also takes thousands of trucks off busy Interstate 26 that crosses the state. Newsome said more such inland ports are needed.

By 2020, the first phase of a $700 million container terminal on the old Navy base in North Charleston should be operating. Newsome said at the same time a new rail transfer terminal nearby to serve the container ship terminal should also be on line. That terminal has been decades in the making. In the 1990s, the authority announced plans to build a massive $1.2 billion Global Gateway shipping terminal on nearby Daniel Island. But there was public opposition and state lawmakers directed the agency to build a smaller terminal, now under construction, at the old Navy base.

The federal permitting process is expected to begin later this year for a $5 billion container terminal South Carolina is building with Georgia on the South Carolina side of the Savannah River. The terminal will be needed because existing capacity at both Georgia and South Carolina container terminals is expected to run out around 2030 or so. The long planning process must begin now to have the terminal built by then. Newsome said there are still significant challenges facing the project including dredging the river, figuring out the financing and working on highway and rail access.