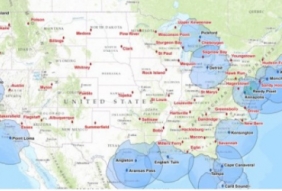 The U.S. Coast Guard, the Department of Transportation (DOT), and the U.S. Army Corps of Engineers posted a notice on August 18 in the Federal Register, describing their intention to deactivate most of the Nationwide Global Positioning System (NDGPS) on January 15, 2016.

The entire system of 62 beacons serving the interior of the U.S. will be shut down. These beacons serve mariners on the inland river system, including the towing industry, marine construction and dredging, inland waterway ports, and inland navigation aids. In addition, the system serves the land surveying, GIS, construction and agriculture industries. The railroad industry has sponsored aspects of the system in the past.

If the system on the rivers is shut down, mariners will need to purchase their own personal base station and radio station, which will incur additional costs and not be integrity monitored nor tied to the NGS National Spatial Reference System, causing another layer of possible position error. Another option would be to purchase an annual subscription to a service that provides corrections, which might not be integrity monitored, would involve extra costs if existing equipment doesn’t interface with the service, and will likely use a non-maritime standard.