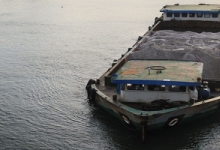 By Aun Pheap, The Cambodia Daily

About 80 villagers and activists in on Monday boarded and attempted to tow away five sand-dredging barges as part of their ongoing campaign against two firms they accuse of polluting a local waterway and causing riverbank collapses, activists and officials said.