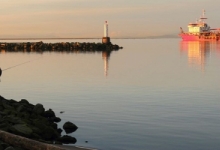 Indian conglomerate reached two milestones this week for its proposed AUD20 billion (USD14.6 billion) Australian port, rail, and mine project in northern Queensland. On 21 August, the Queensland state government announced that a draft environmental impact statement (EIS) on dredging and expansion at the port had given the project the go-head. The final EIS will go to the federal government for approval next month. Meanwhile preparations are under way to start dredging work for the AUD1.2 billion Abbot Point port expansion on 1 November, industry sources told IHS Maritime. However Adani will have to foot the bill. Funding is still at issue, with many questioning the project’s viability while coal prices remain at record lows. Earlier this month the withdrew funding support for Adani’s Carmichael mine after a court upheld a challenge by a local environmental group against government approval for it. The court found that advice about the effect on two vulnerable snake and lizard species had not been considered. The responded by attacking environmentalists opposed to the mine as ‘eco warriors’, ‘saboteurs,’ and ‘vigilante litigants’.