A Major Project is About to Get Underway at a Coastal Erosion ‘Hotspot’ Near Hawks Nest, on the Lower 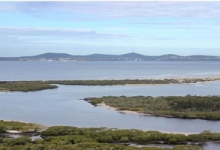 A Commonwealth grant of almost $3 million will help the with what it calls a ‘triple whammy‘ of environmental improvements.

The Eastern Channel of the Lower Myall River, near Jimmys Beach will be dredged and sand used to replenish the badly eroded Winda Woppa sand spit.

The council general manager Glen Hanford says the channel entrance will be moved about 300 metres to the east.

He says that will increase tidal flows.

“By dredging the Eastern Channel of the Myall River and relocating the sand to where it is needed most, the project will improve the water clarity of the river,” he said.

“It will also protect the valuable wildlife habitat of Corrie Island, and renourish the erosion hotspot of Jimmys Beach.

“This project gives tremendous bang for the buck.”