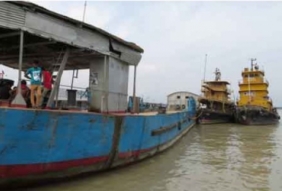 Half of dredging works on river Padma to ensure navigability on Shimulia-Kawrakandi ferry route has already been completed and it would be completed in two more couple of days.

Abdus Salam Khan, executive engineers (dredging) of Bangladesh Inland Water Transport Authority, said dredging at Lauhajang turning point has completed and now dredging on down route would be done and it would take three to four more days.

Bangladesh Inland Water Transport Corporation manager at Shimulia point said they were yet to rescue the ferry Tuplu which got stuck with hidden shoal on September 8 that was carrying 18 vehicles.