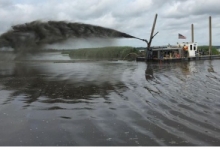 Two dredges move along the remnants of a historic channel at the Prime Hook National Wildlife Refuge spewing sand, silt, mud and water onto an adjacent marsh.

The plan: to restore natural water flow and make the marsh and adjacent beaches more resilient in coastal storms.

Federal officials know there will still be times when the Delaware Bay will wash over the beach onto the marsh as the shoreline moves farther inland with rising sea levels.

“But we want it to self-heal,” said Bart Wilson, the marsh restoration coordinator with the at Prime

The refuge work is part of a $38 million effort to repair the marsh, restore the natural water flow, repair breaks in the existing dunes and create a marsh and beach that can better withstand storms and the impacts from climate change. Part of that money came from the relief dollars. Federal officials want to build future coastal resiliency and the Prime Hook project is part of that effort.

The first step, restoring natural water flow in the marshes, began last month and will likely continue through November or December in the marsh area called Unit III, near.

Because Delaware’s coastal wetlands have been so heavily manipulated, both from draining and ditching projects and from efforts to improve wildlife habitat, figuring out where the natural drainage systems was a challenge, Wilson said.

Federal officials and consultants turned to historic maps and aerial photography – some dating back decades – to figure out how the marsh drained and filled before it was so heavily altered. They plugged the data into a model to see if the restored drainage network would work to improve water flow and concluded it would.

Last month, crews from Dredge America began to cut away at the first of the drainage channels. The sediment is being sprayed in a fine mist on the the adjacent marsh, allowing the level of the marsh to rise a couple of inches at the most, Wilson said.

Federal officials expect that once water flow is improved, there will be fewer instances of algae blooms in the marsh, which can lead to fish kills. That has been a common scenario during the summer.

The marsh is already filed in places with a soupy, neon-green algae.

“This is the bad algae,” said refuge manager Arthur J. Coppola. “This is one of the reasons we want to do these channels.”

The channel work is designed to create a salt marsh habitat that will become increasing brackish – or less salty – as the system moves west through the refuge.

Once the marsh work is completed, breaks in the dunes will be repaired and the beach will be rebuilt from Fowler Beach Road south to Prime Hook Beach.

Justin McDougal, site manager for Dredge America, said the two dredges working on the marsh use specialized controls to get both the width and the depth of the channels right.

A excavator was used to break up the phragmites reed root mats in the marsh before the dredge came through, Wilson said.

In all, some 30 miles of historic channels will be restored in the marsh and 560,000 cubic yards of sediment will be spread in a thin layer over the adjacent wetland.

“One thing that’s been amazing has bee to watch the birds that are loving these spray areas,” he said. They are feeding on the invertebrates that are in the sediment, he said.