The Aqua superyacht is a futuristic design that is 370ft-long, comprised of five decks, and runs off liquid hydrogen meaning it only emits water. Design studio Sinot said the exterior of the vessel was inspired by ocean swells, the movement of the tides, and weather out on the open ocean

The designers of the world's first hydrogen-fueled super yacht have denied the $645million vessel is going to Microsoft boss Bill Gates.

The 370ft vessel, which only emits water, had been linked to Gates for his penchant for super yachts and his keen interest in technological solutions to climate change.

But Sinot, the designers of the concept ship, have since denied this is the case.

But its most impressive feature is locked away in the hold - two 28-ton vacuum-sealed tanks that are cooled to -423F (-253C) and filled with liquid hydrogen which powers the ship. 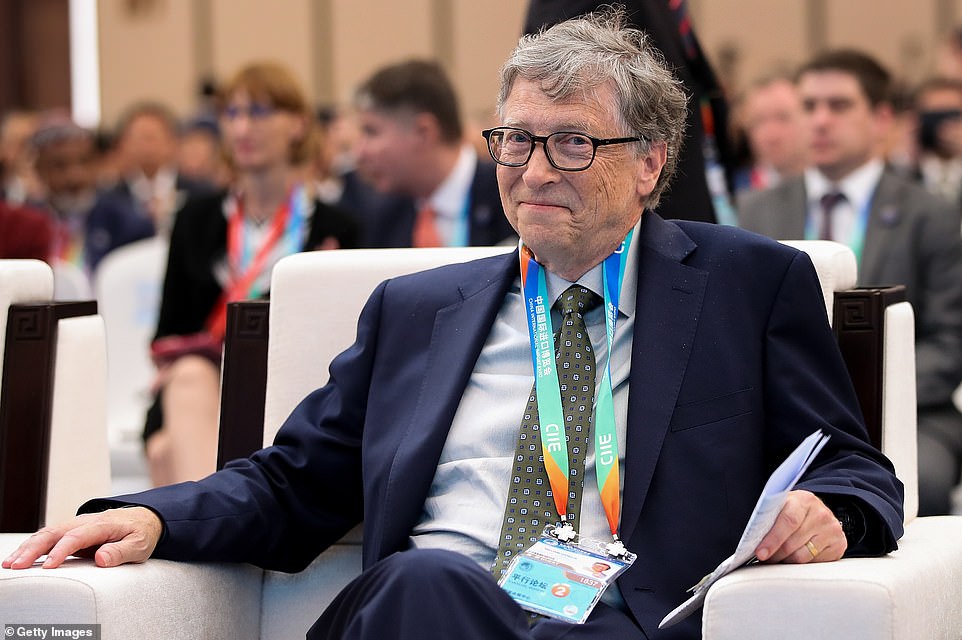 Bill Gates, 64, is known to regularly take vacations on board superyachts and has a keen interest in green energy, but Sinot said he has not bought it 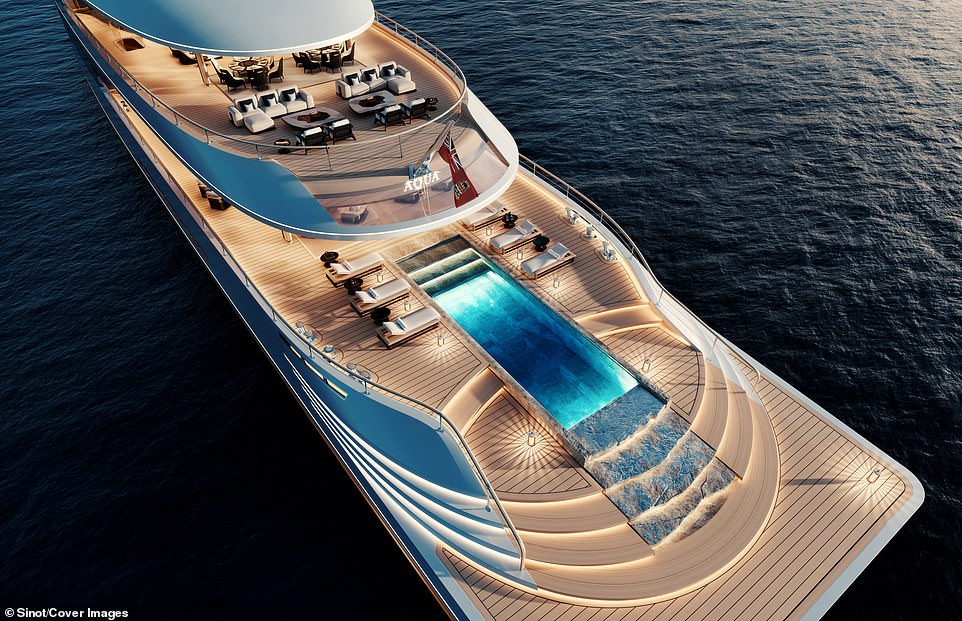 The rear of the vessel has two entertaining areas - one lower lounge area for sunbathing or swimming - and an upper entertaining space with room for outdoor dining. Gel-fuelled fire bowls allow guests to stay warm on colder evenings without having to burn wood or coals 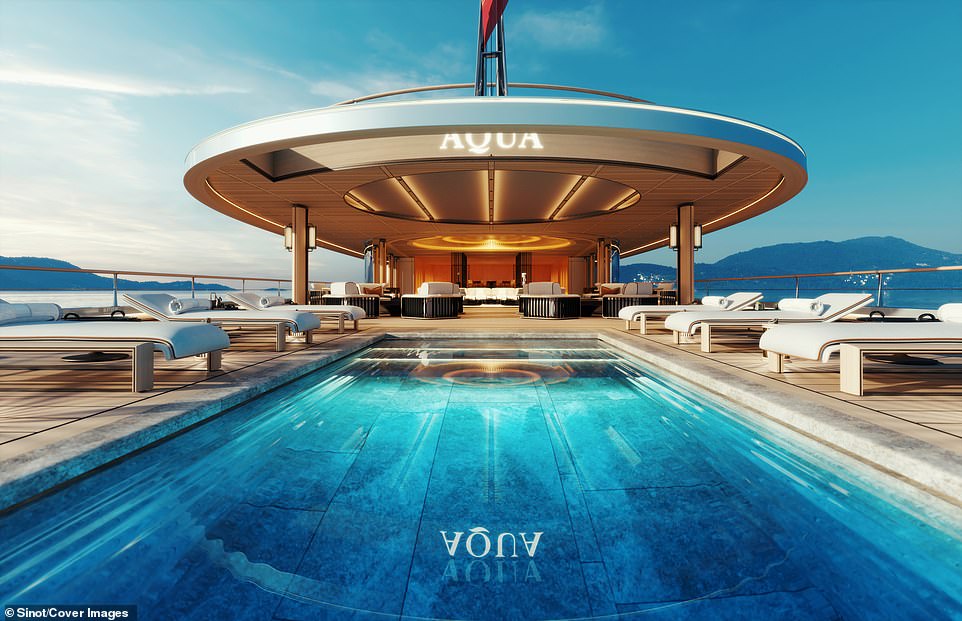 The rear deck features an infinity pool which cascades towards the ocean, while floor-to-ceiling glass windows lead through into a downstairs entertaining space with dining room for 14 people and a home cinema 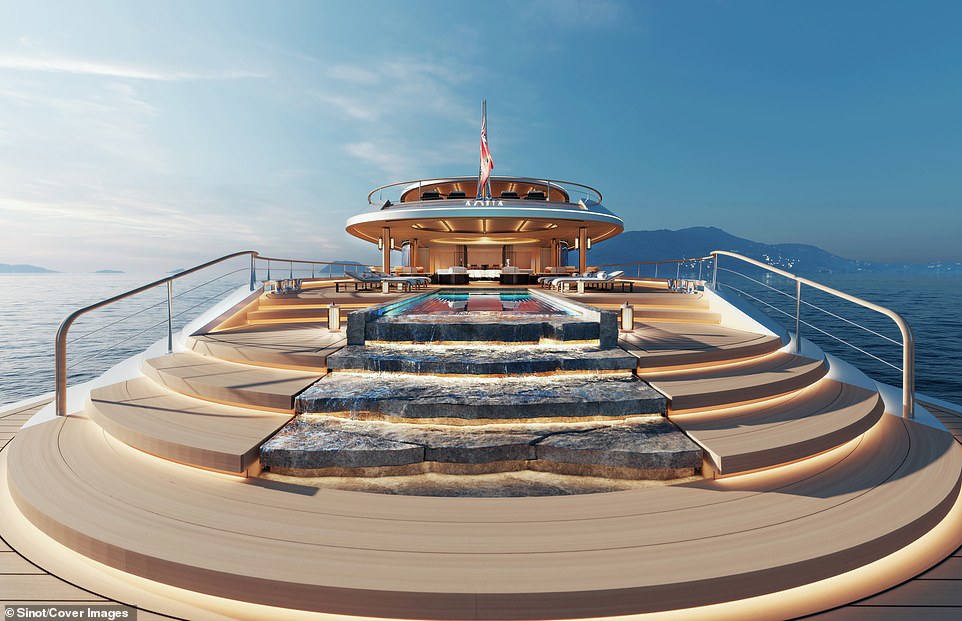 Aqua was unveiled at the Monaco Yacht Show, which runs from September 25-28 in Port Hercules. While the yacht is only a design concept at the moment, its architects hope it will inspire future designs based on its eco-friendly fuel system 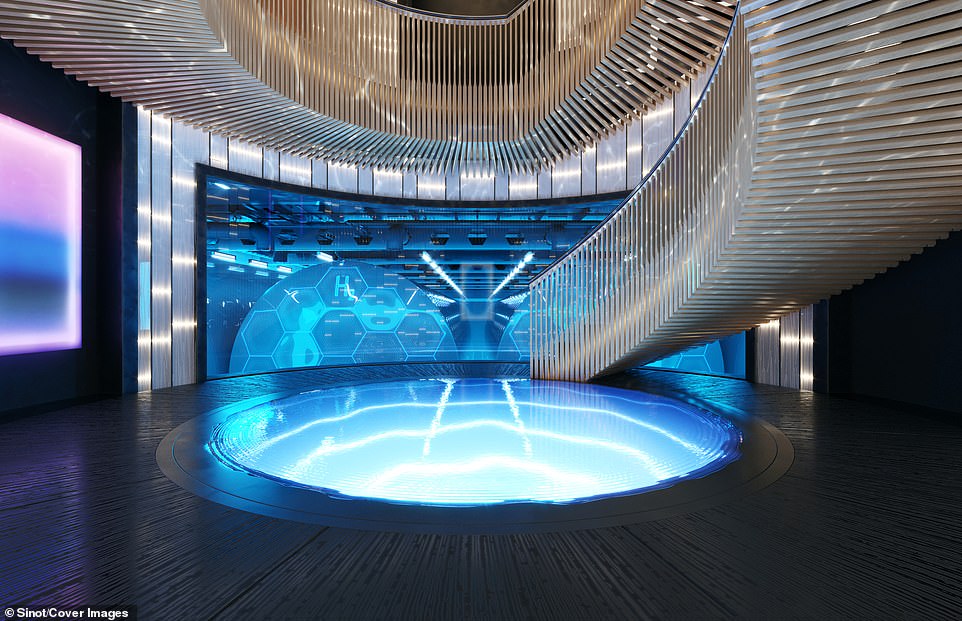 A huge staircase at the centre of the vessel spirals around a water feature (centre) to the lower level, where the ship's hydrogen fuel tanks can be viewed through a glass panel (rear). Each tank weighs 28 tons, is vacuum sealed and cooled to -423F (-253C) in order to hold the hydrogen fuel 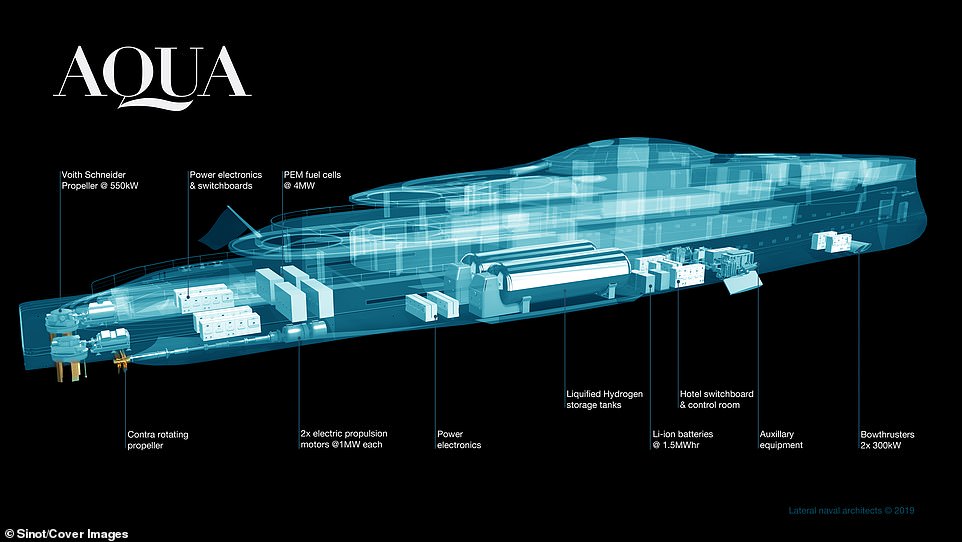 The liquid hydrogen is pumped through special PEM fuel cells which convert it into electricity which runs the engines and electronics on board. The supply is moderated using two fuel cells to make sure it stays constant. The only emission from the system is water, which can be safely pumped into the ocean

The new vessel is not expected to be ready to take to the open seas until 2024.

In a statement, Sinot said today that claims the vessel's concept had been bought by Gates were 'factually incorrect.'

The hydrogen is pumped through a special type of fuel cell which converts it into electricity, while emitting only water which can be safety pumped into the ocean.

Despite its novel fuel source, the vessel is able to reach 17 knots and travel 3,750 miles before it needs to refuel, enough to cover an Atlantic crossing from New York to Southampton.

Designer Sander Sinot is hoping it will pave the way towards a more ecological future for the superyacht industry.

Sembcorp Marine president and chief executive Wong Weng Sun has been appointed the co-chair of the International Advisory Panel on Maritime Decarbonisation (IAP), which champions decarbonisation...

Netherlands-based Van Aalst Group has formed a new company in Norway to provide maintenance and workshop services for clients operating worldwide in the offshore oil, gas, marine and renewables...

Arcadis drafted in to help firms get back to work