Could Subsea Drilling Extend The Life of The Hibernia Oil Field? Its Owners Are Looking Into it

The companies that own Hibernia are considering more subsea drilling to further extend the life of the iconic oil field in Newfoundland's offshore.

But right now there are far more questions than answers, with the oil companies and provincial government offering up few details.

"It is premature to answer many of your questions below given we have not made a decision to proceed," a spokesperson for Hibernia Management Development Company Ltd. (HMDC) wrote in response to a series of questions from CBC News.

But here's what is known.

HMDC has issued an expression of interest (EOI) for companies who specialize in subsea dredging services in order to dig what's known as an excavated drill centre for the placement of drilling and other equipment.

The excavation would measure 100 metres long, 50 metres wide, and 10 metres deep, and work could begin in 2021 using a specialized vessel called a "trailing suction hopper dredge" that can operate in 95 metres of water in the Jeanned'Arc Basin.

The EOI also floats the possibility of a second, smaller excavated drill centre.

The drill centres are placed in a hole in the seabed on the Grand Banks in order to protect them from passing icebergs. Flow lines connect them to the Hibernia platform.

The system is known as a tieback. 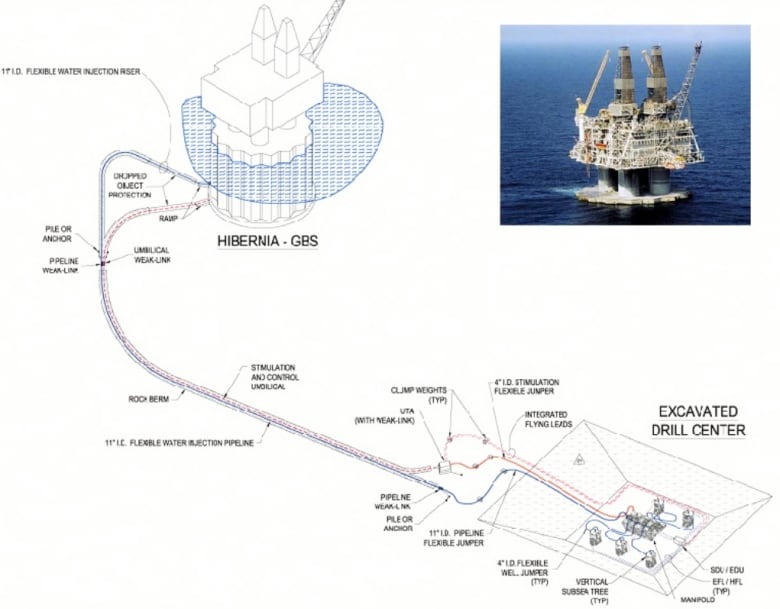 This graphic illustrates the Hibernia Southern Extension, which was completed in summer 2011 and is expected to produce more then 170 million barrels of oil. The companies that own Hibernia are now considering one, and perhaps two more excavated drilling centres. (HMDC)

It's similar to the Hibernia Southern Extension, which began producing oil in 2011, but with one notable difference.

The Hibernia South drill centre is comprised of six seabed wells that inject water into the reservoir in order to create pressure and move oil through five production wells drilled from the Hibernia platform.

This latest proposal, however, involves production wells from the excavated drilling centre, with flow lines sending the oil back to the Hibernia platform.

That kind of system would be a first for Hibernia.

In a related development, HMDC is also pre-qualifying companies who can transport and install a module of up to 1,000 tonnes onto the Hibernia platform, possibly in early 2022.

So what does all this mean? How much recoverable oil is involved? How far away from the platform will the drill centre, or centres, be located? Where will the equipment be fabricated? What are the benefits for the provincial government, and will government buy an equity stake in the expansion?

CBC posed those and other questions, but few were answered.

The Department of Natural Resources say it is "encouraging" to see HMDC pre-qualifying companies for this work and that "identifying opportunities to advance near-field tiebacks" supports government's plan for significantly growing the offshore industry over the next decade.

"We view this as positive and await a decision" from HMDC, a department spokesperson wrote in a statement.

But the department directed questions about the proposal to HMDC.

One source said it's unlikely the province would purchase an equity position in the expansion because the drill centre will be located inside the main Hibernia field, where the province does not have an equity share.

Subsea drilling is required, according to HMDC, because all well slots on the Hibernia platform are in use, "so this is another way to drill new wells," the spokesperson wrote.

"Subsea tiebacks are a well-established alternative to platform drilling given the Hibernia facility is slot constrained."

The Hibernia platform sits on the seabed 315 kilometres southeast of St. John's and has been producing oil for nearly 22 years. It's been described by the lead operator, ExxonMobil Canada, as a legendary asset.

The platform produced its one billionth barrel of oil more than two years ago, and is expected to remain in production until at least 2040, years longer than originally envisioned.

It is one of four producing oil fields in Newfoundland's offshore, and subsea drilling would be a significant investment for HMDC.

Sources say the Hibernia South expansion came at a cost of $2 billion, with the provincial government buying a 10 per cent equity stake in the project, which contains nearly 200 million barrels of recoverable oil.

Meanwhile, there are only a handful of companies throughout the world that can excavate a subsea hole for a drilling centre, with a Dutch maritime contracting company called Royal Van Oord dredging the Hibernia South drill centre using a hopper dredger called Ham 318.

According to the Canada-Newfoundland and Labrador Offshore Petroleum Board, total oil production at the Hibernia field for 2017-18 was 51.14 million barrels, with a daily average of 140,165 barrels.

Following our exclusive report last week on the sinking of the Dredge “Mindi,” here is more information: Mindi is no more

The world’s oldest cutter suction dredger (CSD), the Panama Canal Authority’s (ACP’s) Mindi, sank about 161 km off Balbao, Panama, as it was under tow to a new owner.Built by US-based Ellicott...

Proposals for two offshore wind farms have been opposed by councillors concerned that substations will damage the look of a conservation area.Scottish Power Renewables wants to build two wind farms, a...

Modi govt identified 13 pilot beaches in July 2019 for voluntary eco-label Blue Flag. Ten of these sites are likely to be sent for certification soon.To control pollution in coastal beaches, the Union...

Cryostar and KC LNG (The LNG division of MAKEEN Energy) have been awarded the contract for building an LNG ship bunkering and truck fuelling facility in the port of Antwerp.The project promotors of...