State officials are seeking bids to dredge Massey’s Ditch and move the dredge spoils to the north side of the Indian River Inlet.

The Delaware Department of Natural Resources and Environmental Control issued a request for proposals Jan. 2, with a bid package submission deadline of 2 p.m., Wednesday, Jan. 30.

At 100,000 cubic yards, the project calls for removal of sand that over the years has filled the popular waterway. This is the largest dredging of the ditch since it was created. A laboratory analysis of sediment samples, from August, indicate that approximately 95 percent of the material is sand, while 5 percent is silt.

In an email Jan. 3, DNREC spokesman Michael Globetti said he doesn’t know when the contract will be awarded. It normally takes about three weeks to officially award the contract because of the need to obtain an approved purchase order from the state, he said.

Globetti said he also doesn’t know when dredging work will begin. He said DNREC hopes the successful low bidder will be able to begin work as soon as the purchase order has been approved.

Globetti also doesn’t know how much the project will cost. He said the competitive bid process is used to obtain the best estimate for the project.

The state’s request is the latest in a series of recent moves toward dredging.

DNREC’s Wetlands and Subaqueous Lands Section issued a permit Nov. 28 to the DNREC Division of Watershed Stewardship. The permit, which expires Nov. 28, 2023, allows dredging, depositing material on the beach north of the inlet and temporary placement of of a 24-inch pipeline across state-regulated wetlands to pump sand to the new location.

“This permit is granted for the purpose of improving navigable water depths at low tide and to beneficially reuse the dredged material for beach renourishment,” the permit reads.

The permit called for all dredging to be done at a depth of 6.65 feet below mean low water.

Due to concerns for summer flounder, migratory shorebirds and ground-nesting marsh birds, the state’s permit restricts dredging activity from March 1 through Sept. 30.

The Department of the Army issued a permit Dec. 20 to DNREC. The permit expires Dec. 31, 2028. The federal permits basically says all the work must be done in accordance with project plans the state provided.

All requests must be sent to Charles Williams, Division of Watershed Stewardship, 89 Kings Highway, Dover, DE 19901. 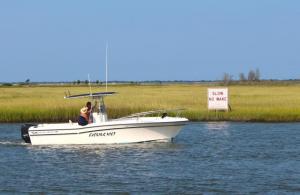 A sign warns boaters of a no wake zone in Massey’s Ditch. 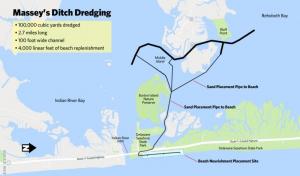 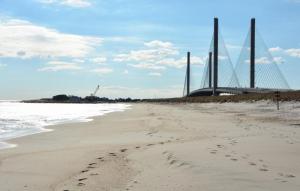 The beach on the north side of the Indian River Inlet will receive the spoils from the dredging project.